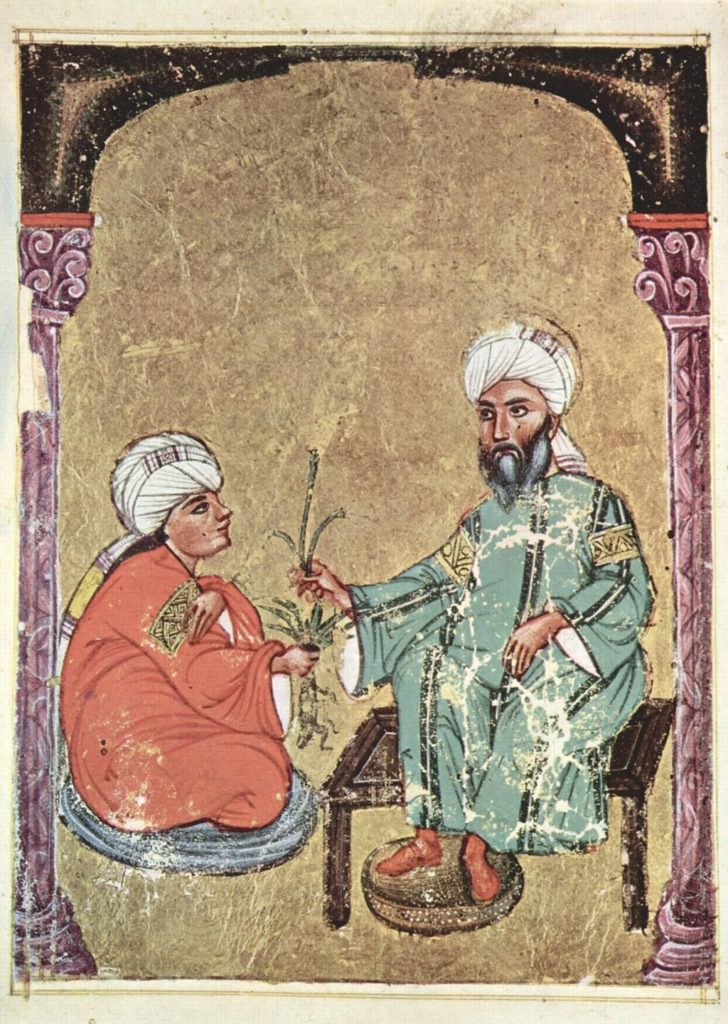 Medicine in the medieval Muslim world was rooted in humoral theory, which had been originated by Greek  scholars such as Hippocrates (ca 460-ca375 BCE) and, especially Galen of Pergamon (131-200 CE).  The theory also governed what would become the basic reference work in pharmacology for many centuries to come, Pedanius Dioscorides’ (90 CE) De Materia Medica (Περὶ ὕλης ἰατρικῆς).

Humorism was both holistic and preventative in that it aimed for equilibrium in the temperament, with any deviations being treated through diet.

This was also in line with the principal aim of medicine according to Ibn Sīnā (Avicenna), which he formulated as follows in his ‘Canon of Medicine’ (al-Qānūn fi ‘l-Ṭibb):

“Medicine is a science from which one learns the states of the human body in terms of what is healthy and what is not, in order to preserve good health when it exists and restore it when it is lacking.”

Food played a key part in restoring any lack of equilibrium, as foodstuffs were thought to be endowed with the primary qualities; for instance,  ginger was considered hot and dry, while cucumber was cold and wet. There wasn’t always a consensus among scholars, though, in terms of degrees of qualities (1st, 2nd, or 3rd), or even about the qualities themselves; coriander, for instance, was said to be ‘heating’ by Galen, but ‘cooling’ according to Dioscorides. The qualities of food also meant that anything that people eat doubled as a potential medicine.

Other factors also played a role in the ingredients and dishes to be selected, as well as the order in which they should be served, to optimize digestion and avoid imbalance in the humours. Great emphasis was put on the need for good digestion, as witnessed by the number of recipes for stomachics (jawārishun). The ‘temperament’ of the diner, that is to say whether, for instance, he was ‘melancholic’ or ‘sanguine’, also played a role in the dishes and ingredients that should be selected. The season and general climate, too, had an effect: for instance, it was recommended for those living in hot climates to eat ‘cold’ ingredients’. Finally, the general state of the diner was also to be taken into account.

The medical and pharmacological treatises paid great deal of attention to the therapeutic qualities of foods, as did many of the culinary works.

By way of example, this is what the compiler of Kanz al-fawā’id (14th c.) suggested with regard to a jujube pudding (khabīs):

“It strengthens a hot stomach, alleviates the belly and cools winds; it makes urine flow and is beneficial for the kidneys and urethra. It fattens up women in the shortest period of time because of the amount of jujube involved. It also rarifies their temperament. It is harmful phlegmatics and old people.” (pp. 110-1)

The great physician al-Rāzī (865-925CE), who became known in Europe by his Latinized name of Rhazes compiled a treatise on ‘Counteracting the harmful effects of food’), in which, he, for instance, compares baking bread in a brick oven (furn) vs the tandoor:

“The latter is better than the former in that it is digested and expelled quickly. It generates little flatulence, blockages, thickness and viscosity. However, furn bread is more suited because of its great nutritional quality and is thus better for those who are sluggish or fatigued, and in need of nourishment.”

Food also held the key to enhanced sexual enjoyment, and cooks often refer to the aphrodisiac qualities of both ingredients (e.g. meat, eggs, carrots, asparagus, and generally those that are hot and moist) and dishes. Aphrodisiac food was also sometimes the sole topic of books, such as that by the astronomer al-Ṭūsī, whose fried chicken, and chickpea mash recipes have been re-created.