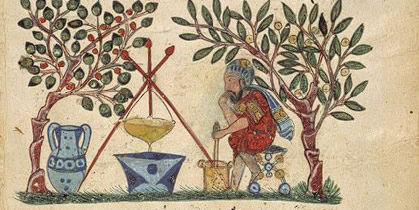 Little is known about the cooking profession in the medieval Muslim world. There were broadly two categories of cooks, those working in private households (including the royal courts), and those working in markets. In many cases, particularly in smaller households, the task would be entrusted to a slave, usually a woman. When it came to the average home without staff, it was the women of the house who would do all of the cooking.

In professional kitchens women were also employed and, according to the 11th-century physician Ibn Buṭlān, they were particularly competent at making sauces.

Even though there are no details about organized culinary training, it must have existed in some form or other in certain places. For instance, Egypt was known to have the best cooks, and foreign notables would either hire Egyptians, or send their own cooks to be trained there. In other cases, the cookery books served as training manuals, as well as recipe repositories.

Like most master craftsmen, the cooks remained anonymous for the most part.

The majority of professional cooks were employed in far more humble surroundings a for a far more humble clientele. These were the market cooks, about whose work we are relatively well informed through the market inspector manuals, which included instructions about supervising the activities of the various food stalls. The market cooks were also more specialised than their ‘fancy’ counterparts in that they tended to specialise in certain dishes, preparations, or items, such as the harīsa (a meat pottage), roast meat, fish frying, sausages, or confections.

A number of cookery manuals provide a number of helpful comments regarding the requirements for cooks. Here are some of the recommendations in the 15th-century treatise by Mubārak Shāh, and it is clear that many of them still hold true today!