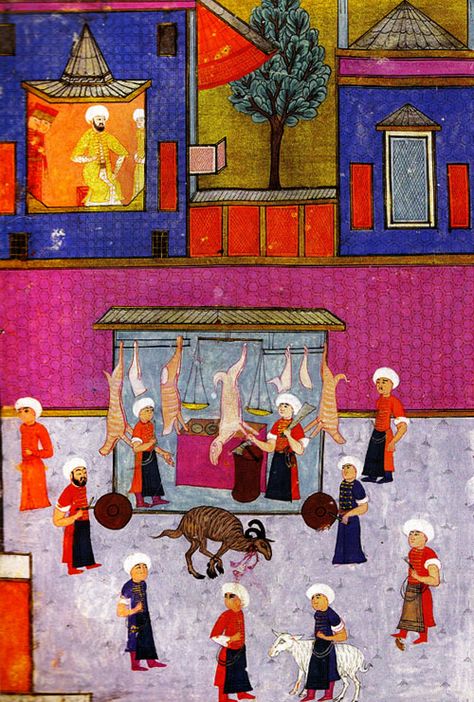 As private households did not have ‘kitchens’ as such, and would often use a communal oven, we are concerned here with the practices in kitchens of the elite, which could employ a large number of people. It is difficult to assess how many people exactly would have worked in the big palace kitchens as they would also have relied on a large number of slaves. Some indication of the importance of the kitchen is the huge monthly allocation in the budget (1,500 dinar)  for salaries during the reign of caliph al-Mu’taḍid (d. 902 CE)

The Ottoman imperial court would take palatial cooking to a whole new level, with each Sultan engaging in culinary one-upmanship with his predecessors; whilst the kitchens of Suleiman the Magnificent (1522-1566) employed some five hundred staff, this number doubled within a few decades. In the same period, the kitchens are estimated to have fed some 8,000 people a day, and records show that in 1573, for instance, some 35,000 sheep and 730 tonnes of rice were purchased for use in the palace kitchen.

The medieval chef had a number of tools in his arsenal in order to produce the dishes that would regale his diners.

To heat food, there were a number of options; in addition to  a stove, there was the brick oven (furn) and the tannūr, a clay oven. The latter was used primarily for baking bread, which is made by sticking it against the sides, though it could also eminently serve to roast chunks of meat on skewers. This type of oven can still be found today. The word was borrowed from the Persian tanūr, while its variant tandūr entered English through Hindi, as tandoor. The word also appears several times in the Bible, in one case (Leviticus 2:4) for the baking of massoth (unleavened bread) around Passover.

The cookery books also mention a wide-ranging batterie de cuisine. The basic cooking pot was the qidr, which was the usual container for heating up soups, stews and the like, and was placed, or hung, over a fire. The fact that it would have originally been hung also explains why the verb rafa`a, ‘to lift’, is used in medieval recipe books when it means ‘to remove from the fire’. Other frequently mentioned pots include the burma (usually made of stone) and the (copper) dast, and the tājin (shallow earthen stewing­ pan).

The basic tools for  processing the food included knives, cleavers, mortar and pestle, and sieves.

Some rulers were so particular about their food that they took their entire kitchen with them when they travelled! The Egyptian historian al-Maqrīzī (1364–1442), for instance, recounted in his chronicle al-Sulūk li–ma‘rifat duwal al–mulūk (‘Book of Entrance to the knowledge of the dynasties of the Kings’) that when  Sultan an-Nāsir Muhammad went on the pilgrimage in 719/1319–20 he carried with him  not only golden, silver, and copper pots, and ovens, but also many of the required ingredients. Besides flour and barley, the caravan included wooden basins in which vegetables and spices such as leeks, mint,  coriander and basil were planted, and harvested at need. Two ships loaded with salt were sent ahead to the point of destination., while some five hundred camels set out from Damascus carrying further provisions, such as fruits, conserves, pomegranate seeds and almonds.  (1936: II.1, p. 196)